For the first time in its 22 year history, the Yellowdot Christmas Cup had a Champion Golfer who managed to retain his title – but only by the smallest of possible margins…

On a day when the weather gods smiled down kindly on us, our 2020 winner Mark Sykes squeezed to victory via the dreaded countback formula. Tied equal with debutant Alistair Pettigrew on 38 points each, he secured the famous trophy by scoring 7 points (v 6) on the last three holes – having tied the back nine (19 each) and back six (13 each). Many congratulations Mark, and the offer of keeping the trophy if you can win three in a row still stands – just don’t expect sympathetic treatment from the handicap committee.

The team prize (also for 38 points) went to Tim Leney, Paul Calfe and Richard Wheatley, with other prizewinners including Alistair for a Nearest the Pin, and Jay Patel for a Longest Drive. Oh, and Jay also collected the Wooden Spoon (on countback) which I’m sure he will want mentioned.

The Champagne Moment belonged to Alex Polhill, whose lack of attention with the marker pins almost caused chaos over the prize holes – something someone with his experience in the higher echelons of golf organizing was something of a shocker. The incident was brushed aside as a ‘senior moment’ and is unlikely to ever be mentioned again – yeah, right.

Many thanks to all that competed, and also to Hampton Court Palace Golf Club that once again proved an excellent hosting venue, especially with the newly refurbed Wolsey Room as our private dining area. 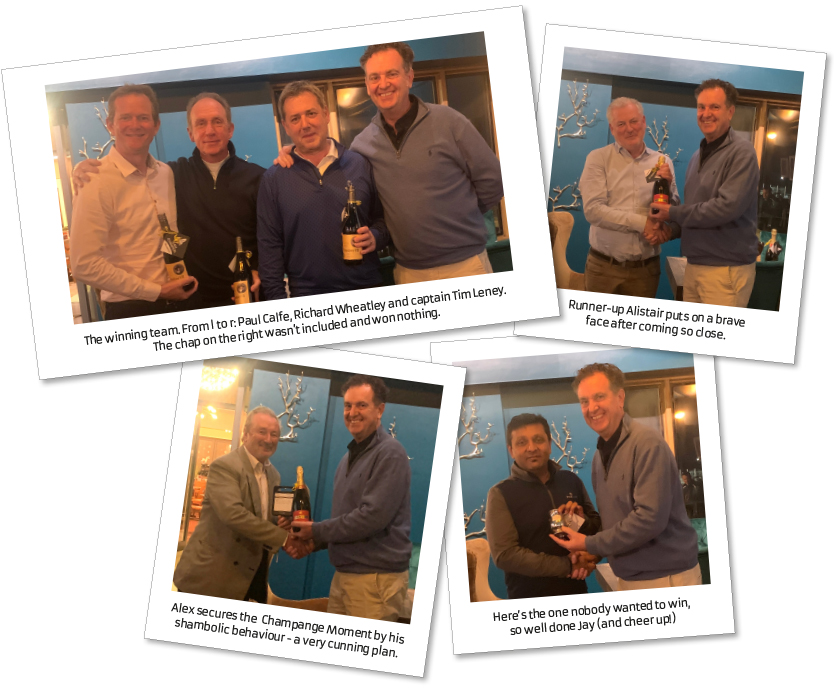