Three is the magic number

Tucked in between lockdown, impending Tier 3 restrictions and some very wet weather, the 2020 Yellowdot Christmas Cup was held successfully at Hampton Court Palace Golf Club for the 21st successive year.

There was a bumper line-up of 16 golfers, with previous double-winner Mark Sykes emerging victorious for the third time (as pictured above receiving the trophy from 2019 Champion Jez Hampton and the Yellowdot host). Mark scored an impressive 39 points, just one point ahead of both Richard Wheatley and Jonny Young, the joint runners-up.

Jonny and his brother Geoff collected a couple of Nearest The Pin and Longest Drive prizes each, whilst Andy Sanders won the Champagne Moment for his tantrums regarding a ‘mis-hit’ which actually led to a birdie – there’s no pleasing some people!

In the team competition, the final group led by captain Mike Leney, including Mike Linforth and the aforementioned Young brothers did just enough to get their noses in front – you can see their smug faces below.

Finally, a special mention to debutant Ciaron Sykes (no relation to our champion) who propped up proceedings and captured the wooden spoon. Still, going home with a prize beats leaving empty-handed – sort of…

Many thanks to all who competed and to Andy Brett at the golf club for his help in making this happen. We go again in 2021. 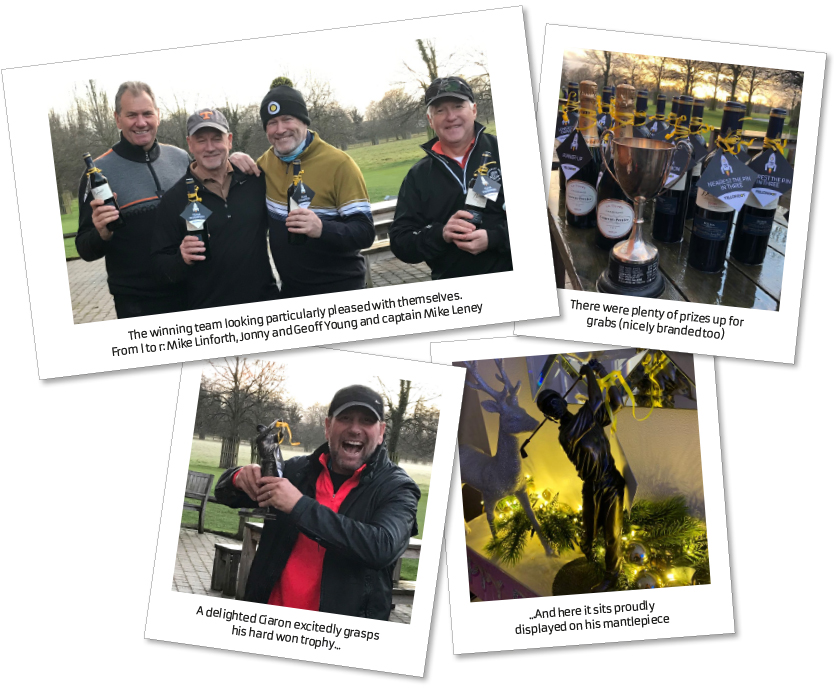